The City and Dungeon of Tonnisborg has long historic ties to Dave Arneson's Blackmoor. Greg Svenson, whom Dave has described as one of his most enthustiastic players, developed this area of map in Dave Arneson's Campain. When Dave added the city of Vestfold, named after a region in Norway, Greg made adjustments so that Tonnisborg became relocated on a small island that is part of the greater City of Vestfold, the largest city in the Kingdom of Blackmoor.

People who want to learn more about Tonnisborg are now in for a treat. As reported by the Secrets of Blackmoor Website, Greg Svenson is working with the producers of the documentary project "Secrets of Blackmoor". The plan seems to be that Tonninsborg will be a published adventure which will be a "thank you gift" to those who invest in the Kickstarter for the Documentary. Also involved with the Tonnisborg module are Dan Boggs (aka Aldarron), publisher of Champions of ZED and Dragons at Dawn and Bob Bledsaw II of Judges Guild.


The whole "invest in Kickstarter for documentary to get a module" sounds a bit complicated to me and I think I would have preferred to have a separate Kickstarter for the Tonnisborg project, but in any case I am really curious to see what this module will be all about. Having Aldarron on board with this project makes me even more optimistic as he is a talented game designer and someone with intimate knowledge of Blackmoor. If you are curious to see more of Greg Svenson's ideas for Blackmoor, make sure you get the free PDF booklets by Greg hosted at The Comeback Inn.

by Baron
Why take parts of the wilderness sections out, and replace it with some game rules I've never heard of? Why add Bb Jr's art? And as you say, why is this part of a kickstarter for a documentary? Guess I'm not their target customer base.

Baron wrote: ↑
Wed Oct 31, 2018 7:45 pm
Why take parts of the wilderness sections out, and replace it with some game rules I've never heard of? Why add Bb Jr's art? And as you say, why is this part of a kickstarter for a documentary? Guess I'm not their target customer base.

I have contacted the people involved with the documentary to see if they have some answers.

I don't own Champions of ZED, but from what I understand it is similar to OD&D, but with an Arneson twist. It is possible that it is easy to use with other editions of D&D, but again I don't know what.

I missed the part about them cutting out parts of the wilderness sections. That does seem like a real shame.

I will leave those questions to people involved with the documentary.

by Baron
Awfully good of you to enquire, Havard. Thanks.

by Secrets of Blackmoor

Baron wrote: ↑
Wed Oct 31, 2018 7:45 pm
Why take parts of the wilderness sections out, and replace it with some game rules I've never heard of? Why add Bb Jr's art? And as you say, why is this part of a kickstarter for a documentary? Guess I'm not their target customer base.

Hi Baron, this is Griff one of the directors of Secrets of Blackmoor.

Some background on Tonisborg for you here:

During an interview session at David Megarry's house, as you will likely know David created the Dungeon! board game; David went down to his basement office and returned with some maps. He had no idea what they were. I looked at them and immediately thought they looked a lot like Blackmoor. Perhaps these were copies of the now lost original Blackmoor Dungeon? 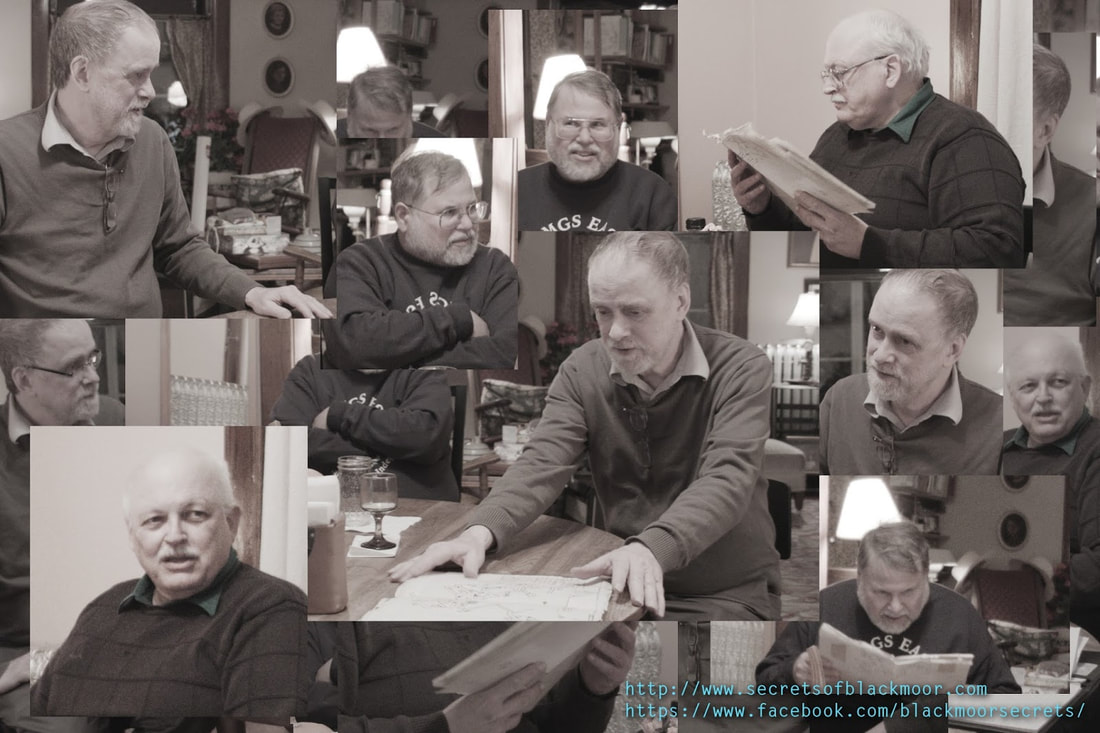 David Wesely and Ross quickly pointed out that the listed monsters were taken directly from ODD, so it had to come later than the Blackmoor Dungeon.

It was then that David Megarry suggested it could be Greg Svenson's dungeon, which he had lost in Boston by accident 3 decades earlier.

When Daniel Boggs came on board to help with research and much needed criticism, he too asked if this was The Lost Dungeons of Tonisborg. Yet Dan took it one step further, he emailed the scans to Greg Svenson who quickly recognized his own handwriting on the level keys.

I had already been speaking to Dan about doing a book called 101 passages, that could be used as a stocking tool for dungeons, but now with these famous and historical maps in our hands, Dan suggested we do a book on Tonisborg.

That is how the book come into being.

In answer to your questions:

1. Books are expensive to print. I refuse to do a second rate product and want this to be a cherished and long lasting hard bound edition. One bid I got for printing came in at $20,000.00. Publishing is expensive, and thus we decided since this is essentially a dungeon module; we will only publish the dungeoning part of the rules with this dungeon to cut down on the page count.

2. Why Bob Jr.? This is simple. This collection of maps, which is a complete dungeon set from before D&D was published, and the second oldest dungeon out of the Twin Cities, has both entertainment value and historical value. We see it as an extension of Dave Arneson's First Fantasy campaign, as it expands the Blackmoor setting. Bob Jr. did some of the art that was in FFC when he was 14 years old, so there is a lineage regarding Bob's artwork and Blackmoor. We intend to continue this tradition as long as Bob is able to do art for Blackmoor related products.

3. This dungeon was part of the research that came from making Secrets of Blackmoor. It would not have been discovered if the movie wasn't being made. We are film makers, thus we felt that the dungeon should help us generate the funds we need in order to finish the film. I can tell you that over a 5+ year period, we have spent more than $150,000.00 in making the film thus far. This all came out of our own pockets, and to be honest we're a bit broke now. Yet we need a bit more to help pay for the finish work to complete the film.

We did it all backward. We didn't go begging for money without having anything to give back to those who donated. We were stupid and spent our own money in order to make a film.

Even with what we made from the KickStarter, we are in the hole about 150K. We will need to sell a lot of DVD's to make back our investment, never mind any kind of profit. This is the nature of being a indy film maker. You invest both cash and hard work, and then if you are lucky, you have a movie. In the end there are no guarantees anyone is going to want to buy DVD's of your film.

Back to Tonisborg. Tonisborg was originally played with a draft of OD&D. So it is meant to be played in a very traditional style. Dan Boggs has a set of OSR rules he published in order to better organize and explain how OD&D is played. Dan's research on the subject is extensive and he is probably the most well versed researcher on First Fantasy Campaign anywhere in the world. We've included a variant on those rules so that the Tonisborg module is complete. You get historical back ground on how the dungeon was made. There is a long section on using traditional play methods in an RPG dungeon setting. There is also the complete set of rules in order to sit down and play the dungeon. Of course, you also get the complete 10 level dungeon with original maps and Keys, and a set of updated maps and keys for ease of play.

It isn't likely that another dungeon of this kind will ever be discovered again. This is truly a one of a kind book.

Part of our pitch in creating Tonisborg is that as a Tonisborg DM, you now are the keeper of old gamer secrets. I have been speaking with Havard, and in addition to the book, we are going to have a referee's only section on Havard's Blackmoor forum that will only be accessible to owners of Tonisborg Dungeon.

The Tonisborg book itself has this disclaimer:

"Spoiler Alert
If you’ve purchased this book and do not intend to become a Game Master, you will ruin your experience as a player by reading the section on Playing Tonisborg. Above all, you do not want to go and tell all your friends what is in this text either, as it will also spoil the game for them.

If you do decide to read the text anyway, it poses challenge to you as a gamer: if you have always been a player, you may want to consider that by reading this manual, it may be time for you yourself to take the reigns of the Game Master within your gaming group. That in assuming the mantle of referee, you can read this book freely and become an advocate and mentor for Traditional Adventure Games; and more importantly, you will become a new member in a historic tradition that harkens back to much older manuscripts such as Charles Adiel Lewis Totten’s: Strategos, from the 1880’s to the Twin Cities creations, David Wesely’s: Braunstein, Duane Jenkins’: Brownstone Texas, and David Arneson’s: Blackmoor.
"

Excerpt from The Lost Dungeons of Tonisborg by Judges Guild Game Company and Secrets of Blackmoor.

Having said that, there is more!

If we do ok with sales on Tonisborg. And I mean we just make back our costs. There are future products in the works. Dan and I are very excited to make many more updated yet historical Blackmoor books.

All of these would be geared toward the Old School OD&D type RPG'er. And also, it is very world specific; it is all Blackmoor. It's really for all of the hard core fans out there who want more Blackmoor.

by Yaztromo
Looking forward to this adventure!
All times are UTC+01:00
Page 1 of 1