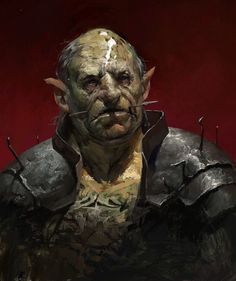 Ash Goblins are a cool addition to the D20 Blackmoor version of the setitng. They are similar to goblins, but more intelligent (INT 13), all able to craft their own weapons and give out a terrible battle scream.

Their origins are slightly problematic. They live in the Ash Hills, near the Valley of the Ancients. It is said that they were created when a star fell into that valley which began to change them from regular goblins. This brings us back to when the FSS Beagle crashed. DA3 says it crashed 5 years ago, but that makes no sense. Zimriel's fan gazetteer changed that to "5 years before the FFC", but even though Zeigteist Games more or less copied Zimriel's timeline, they removed any specific date for the Beagle's Crash. The d20 books do suggest that the crash happened a long time ago. I also think it is clear that the Beagle crash did not create the valley itself. It is possible that the Death of Hadeen was what created the valley. That event was something the D20 line introduced and even confused this issue further. The Monks of the Fallen Star class was also introduced in the d20 line and the monks witnessed an event they called Starfall which they believed to be the fall of their deity, "The One". Starfall is mentioned as taking place "centuries ago". It is not unlikely that they witnessed the fall of the Beagle, but confused that with the fall of Hadeen (assuming Hadden is "The One"). Still, all of this does make this whole storyline complicated.

What's slightly disappointing is that Ash Goblins are limited to such a small part of Blackmoor. I guess if they have been around for a few centuries there could be quite a lot of them out there who have perhaps settled in various parts of the world? Should there be other types of Goblins too? Could other events trigger the development of various types of Goblins?

In general I feel quite on board with having nasty variant of common monster (and even humans) around the Valley of Ancients.
I'm the Real Nowhere Man, sitting in my Nowhere Land,
making all my Nowhere plans for Nobody.
Top

After the Great Rain of Fire, I'd like them to spread in northern Skothar, and so I've placed them in Threshold issue #20

I'm going to have them spread out a bit even back in the classic Blackmoor Era.

-Havard
Aliases: Håvard Frosta, Havard Blackmoor, Blackmoorian, Dragon Turtle etc
Where to find me on the Web
The Comeback Inn - My Blackmoor Forum
The Blackmoor Blog
THRESHOLD Magazine - The Mystara Fanzine
My Articles at the Vaults of Pandius
Moderator of the Mystara, Blackmoor and Thunder Rift forums.
My moderator voice is GREEN.
Top
Post Reply
4 posts • Page 1 of 1