In the Maztican Box Set there is mention of a set of ruins in the desert known as the Sands of Itzcala called Olbi. This is what the FR Wiki says about it.


Olbi
The ruined city of Olbi was older than even Tewahca. It was not as spectacular, but possessed secrets all its own. Olbi consisted of a series of clean, well-carved caverns with a variety of statues carved directly into the walls (representing the Maztican pantheon). The precision of the carvings showed evidence of metal tools or magical shaping, and treasures such as works of pluma, hishna, and gold could be found there.

Frankly, I don’t believe there is any other information either canonical or fanonical about it, but I’m curious if anyone has ever speculated as to what it might be or who might have had a hand in its creation?
Follow the Maztica (Aztez/Maya) and Anchorome (Indigenous North America) Campaigns on DMsGuild!

I remember that one of the characters in the Maztica novels went to an obscure place that nobody else seemed to know about, but I'm not sure it was Olbi. I think it was somewhere to the south. I'd have to reread the novels to be certain.
David "Big Mac" Shepheard
Please join The Piazza's Facebook group, The Piazza's Facebook page and follow The Piazza's Twitter feed so that you can stay in touch.
Spelljammer 3E Conversion Project - Spelljammer Wiki - The Spelljammer Image Group.
Moderator of the Spelljammer forum (and administrator). My moderator voice is green.
Top

I remember that one of the characters in the Maztica novels went to an obscure place that nobody else seemed to know about, but I'm not sure it was Olbi. I think it was somewhere to the south. I'd have to reread the novels to be certain.

Hrmmm. I wonder if that was the Tewahca scene, but probably not because that was a pretty major event. You have me super curious right now. I’m due for another reading.

As far as Olbi is concerned though, I really don’t think there’s anything else about it anywhere. I LOVE untouched (by official lore) locations which are getting harder and harder to find in the Realms. This might be good time for some home brewing.

I’ll need to find a good ruin map and a background to do so though.
Follow the Maztica (Aztez/Maya) and Anchorome (Indigenous North America) Campaigns on DMsGuild!

In the first book eagle Knight Poshtli went to the Sunstone in the desert of the House of Tezca https://forgottenrealms.fandom.com/wiki/House_of_Tezca and he met also the desert dwarves but he did not visit the two mentioned ruins.
Editor of Threshold, the Mystara Magazine: http://pandius.com/thrs_mag.html
Top

Sturm wrote: ↑
Mon Nov 18, 2019 1:48 pm
In the first book eagle Knight Poshtli went to the Sunstone in the desert of the House of Tezca https://forgottenrealms.fandom.com/wiki/House_of_Tezca and he met also the desert dwarves but he did not visit the two mentioned ruins.

Yeah, that was a big scene where they introduced the desert dwarves. Halloran, Erixitl and some others made it to Tehwahca, but Olbi was geographically pretty far from the crux of the adventure (it’s in the Sands of Itzcala where the others are in the House of Tezca desert).

So Olbi is untouched. Leaves a lot of room to make things up, but this is a tough one. The creators have to have these qualities.

- They used metal tools or stone shaping magic
- They existed before the time of the great godswar between Qotal and Zaltec but AFTER the gods gave mankind hishna and pluma. That’s might be a short window of time.
- They paid homage to all of the gods.
Follow the Maztica (Aztez/Maya) and Anchorome (Indigenous North America) Campaigns on DMsGuild!

So, Dyson Logos occasionally releases maps for commercial or personal use and allows for alterations to be made. I found one that seemed a good fit to Olbi's description, except I added some statues to match the description of Olbi. Once I get a decent history and background down, I plan to fill these rooms in a very Gygaxian manner.

There is a statue for each god in the pantheon, plus a few extras I have ideas for. 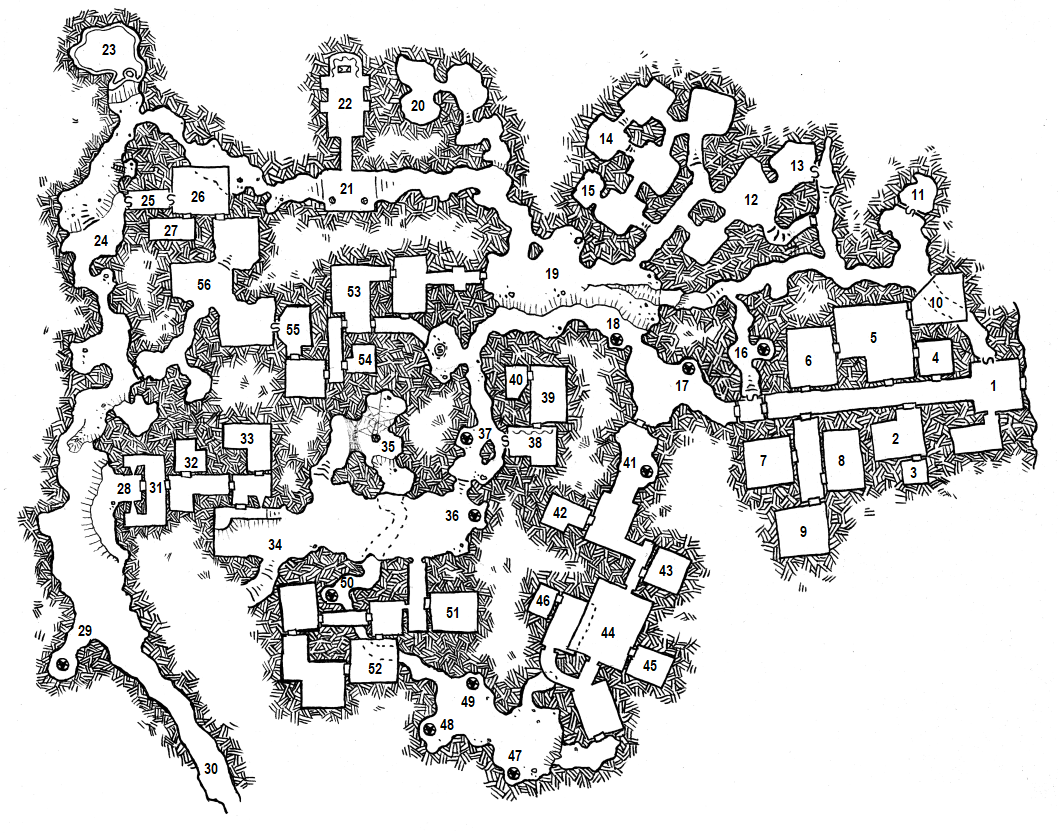 The Ruins of Olbi are extremely old, and there have been numerous inhabitants over the ages. The style of the carving found in the oldest portions of the complex suggest that it was first inhabited nine to ten thousand years ago, before even the construction of the great City of the Gods, Tewahca.

The ruins themselves are mostly caverns whose walls have been neatly shaped using either magic or metal instruments. Instruments with these capabilities did not exist until only relatively recently.

Since then, newer occupants have dug out additional rooms into the cavern walls and there is a hodgepodge of styles to the construction.

The name of the ruin is derived from the word Olbinate. This is the word for "death" in the tongue of the Dog People who tend to give the ruin a wide berth. It’s original name is unknown, but Olbi is fitting considering so few who enter ever emerge. It is believed to be crawling with foul beasts, ancient guardians and traps, but also to hold secrets and the forgotten magics of its former occupants. Pluma and hishna magic is said to litter its halls.

Not much else is known of the interior, though the desert dwarves were the last to inhabit the ruin. Over 300 years ago, they were chased out by horrors from deeper within and the little information that is known about the ruin comes from their stories.

The dwarves describe the exquisite and indestructible statues of the deities which are scattered throughout the complex. Here again, ancient depictions of the gods are used, once again giving a general age for the ruin’s construction.

The dwarves will also speak of some of the horrors encountered, including lightning fast lizards whose poison could bring down even the stoutest dwarven warriors. Specifics about other darker horrors have been lost to history, but the memory of the death they caused has kept the terror alive. Desert dwarves are as fearful of the place as are the Dog People.
Follow the Maztica (Aztez/Maya) and Anchorome (Indigenous North America) Campaigns on DMsGuild!

In the years following Qotal’s gift of pluma magic to mankind, a sect of his worshipers sought to increase the might of the very gift itself. The True World has been wracked by war for centuries and when pluma had been brought to mankind by the Plumed Dragon’s priests, it didn’t all just suddenly stop.

Zaltec and his flock were still ascendant, and their incessant need to feed the gods demanded that folks find a way to defend themselves. Pluma was a boon, but in those days its magic was too gentle to compete with the combat oriented aspects of hishna.

A consortium of plumaweavers and their eagle knight guards was formed by folks from Pezelac, Payit and even some Itzas of Far Payit. This group called themselves the "Ilhuitl" which in the archaic Payit tongue simply means "the Plumed."

Over time, the Ilhuitl began to accept others into their ranks. The sister goddesses were well represented among its ranks, particularly among Watil and Nula. Kiltzi and Eha each had a priestess of high standing in the ranks, but their lay worshipers were uncommon.

Among the brother gods, Plutoq was the first to grant his blessing. Dozens of men and woman arrived from the land that would one day become Huacli, where his faith had taken the strongest hold. Plutoq's priests are credited with having cleared out and shaped most of the caverns, starting with the removal of stalagmites and stalactites that barred the way deeper into the bedrock. The location was chosen for its remoteness, and its inhabitants knew that a trek across the desert would take many casualties from an invading army. The living was harsh, but coaxed by the representatives of various gods, the land still provided.

Tezca and Azul brought the first hishnashapers, ignoring the irony of the consortium's name. For its time, the Ilhuitl would become the most cosmopolitan of groups known in the True World.

Zaltec's priests were not pleased with the Ilhuitl's initial intentions, but rather than resorting to warfare, they too worked their way into the consortium's graces and sought to take control from the inside. At this point, there were nearly as many practitioners of hishna as there were pluma.

In an act of unprecedented cooperation, statues of the gods were built, each with their own magic and they were built to be nearly indestructible. The completion of the last statue (of the dead goddess Coatlicue) would be the last moment of peace within Olbi.

Delving deeper into the caverns, a priestess of Nula named Papan discovered an underground lake whose black waters swirled of their own volition. Unbeknownst to her, the lake was a gateway to a region of the Spirit Realm inhabited by mad and dark entities. The entities called to Papan who bathed in the swirling waters.

What emerged was no longer human and it slithered deeper into the caverns. Over time, Papan began to prey upon the Ilhuitl who used the greatest of their pluma and hishna magics to defeat her. Alas, despite their burgeoning power, Papan prevailed with the help of hundreds of tiny spirits and other monstrosities she brought from the Spirit Realm. Within a few years time, the Ilhuitl were forced to either abandon their home, or perish. Papan became known as the Llahamaga (the Deformed One) and the ruins of Olbinate were left to her.

In the 9000 or so years since the dissolution of the Ilhuitl, Dog People, lost Nexalans, the aforementioned desert dwarves and many others have attempted to reoccupy the ruin, but in each case they were either killed or managed to flee before the Llahamaga could find them.
Follow the Maztica (Aztez/Maya) and Anchorome (Indigenous North America) Campaigns on DMsGuild!

As an alternative take, perhaps this is the cave where Tecco received his vision and caused the Mazticans to migrate to the south and create the empire?
Returned Maztica - a new vision for Maztica in the 5th Edition era of the Forgotten Realms! Learn how the continent has changed after invasions and dragonfire, and take part as the people of Maztica finally take their destinies into their own hands!
Top

Lol. I had found the reference in the box set as well, and had been planing to use the site for my Malatra/Maztica crossover adventure. (Idea was that the Ancients of Malatra had a "back door" to escape their land should they ever need it....through it many other races (such as Tabaxi) made it into Malatra over the years). I am not far enough along that I am married to the site yet, but it is amusing that someone else found it.
-apotheot
https://www.facebook.com/groups/MalatranSpirit/
Top
Post Reply
10 posts • Page 1 of 1