Heroes of the Vale Episode 3

The civilized world has been reduced to a series of points of light in a great wilderness of danger and monsters.
The Book-House: Find Nentir Vale products.
Post Reply
6 posts • Page 1 of 1

Heroes of the Vale Episode 3

Episode 3 of the Heroes of the Vale actual play podcast, set in the Nentir Vale, is now available on YouTube. This is the first episode with Todd Kenreck stepping into the DM role. Jen Kretchmer joins the cast as a new player, too. She plays Alyndra Sarrbarand, a high elf multiclass knowledge cleric/divination wizard. 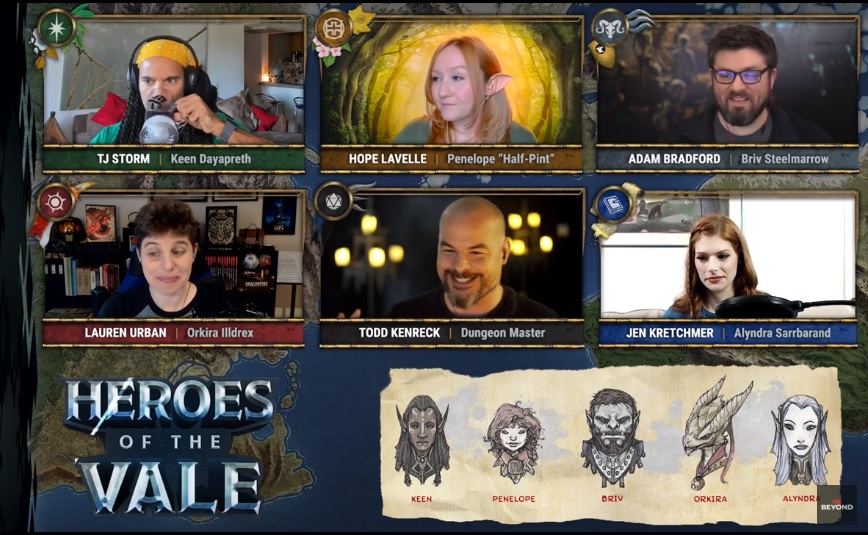 Can you make a quick review?
This vacuous planet...
Let's start our age from zero
Legend is something got to be repainted
Let go the accelerator
Now is the time
Top

I've been super busy with work this week, and haven't had a chance to watch more than the first 30 minutes or so. Thus far, it's purely been combat with Ruin. The new PC was introduced, and I think I'll prefer this character over Fla'apper. Todd Kenreck is running the combat using a fair amount of description, which keeps it interesting.

I'm happy to post more when I've had the chance to watch the rest.

You might want to use the [ hide ] tag if you are going to discuss spoilers.

Good suggestion. I'll do that.

I finished the episode, tonight. I'll try to keep this as spoiler-free as possible, avoiding details, but if anyone wants to avoid any possibility of spoilers, please don't read any further. I don't think I need Hide tags, as Big Mac had suggested, as I won't name any names or provide details.

TL;DR – The episode starts off well, hits a slow point in the middle, and then ends well. It still doesn't particularly feel like it's set in the Nentir Vale, but the conclusion of this episode, along with Todd Kenreck's DMing and the new PC to join the party, are entertaining enough to keep me watching for at least another episode.

Here's a bit more detail. There's a dramatic moment in the episode, and I liked the way the players role-played it. So far, I like Todd Kenreck's DMing, and he did well giving the scene time to let the weight of it sink in, and allowing the players the opportunity to role-play their reactions.

Things get a bit slow in the middle of the episode. When one of the players describes their character as going to sleep because they're so bored with the conversation, and another charges ahead while the other characters have side conversations, it doesn't make for good viewing. It's a completely normal part of role-playing, and some viewers might enjoy the additional role-playing in the scene, but I would've preferred if the DM had gotten things moving a bit faster.

But after that, it got interesting again. Some unexpected allies appear, and the way Todd Kenreck played them was quite amusing. The way the players interacted with these NPCs was some of the best role-playing I've seen in the series, thus far.

The episode ended on a cliffhanger, followed by an epilogue that likely sets up a future adventure arc. It was sufficient for me to want to watch the next episode.

I still don't feel particularly attached to the PCs, but I'm also not a big fan of actual play. Even with TV, I often take a while to warm up to a series and its characters, so I'm willing to be patient and continue watching for a while. Todd Kenreck had to wrap up the story line that Mike Mearls had introduced. Now that the campaign is moving to its next phase, I'm interested to see if the setting feels more like the Nentir Vale, rather than a more generic D&D setting. Other than dropping a few Nentir Vale location and deity names, the series hasn't taken advantage of its setting. Still, these are still early episodes, so I hope to see that change given a bit more time.