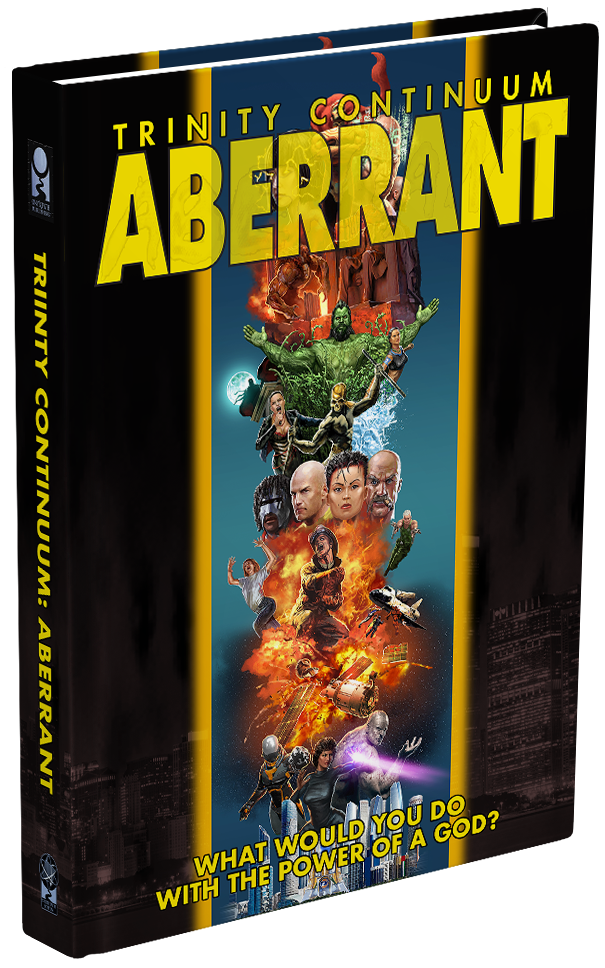 The Aberrant setting expands the Trinity Continuum timeline with a new system and setting revised from the ground up. Trinity Continuum: Aberrant is the next edition of the superpowers game Aberrant, released in 1999. This new edition features mechanics that are both flexible and fast as well as nova powers designed to scale through the degrees of power that novas can reach. While the setting is quite similar to the original edition’s, it has been updated to further enable heroic roleplaying.

The Trinity Continuum is a vast timeline of adventure, speckled with dramatic points across the past, present, and future, where heroes - or villains - arise. While each setting supplement will explore part of the Trinity Continuum timeline, these points in time aren't dots in a straight line - this isn't a long-form metaplot to be simply read aloud. Instead, they're points of quantum probabilities. Anything can happen, so it's up to you and your cast to make it happen!

The Trinity Continuum will grow as the timeline is explored, with possible setting supplements handling everything from ancient Greek battalions to two-fisted pulp daredevils, from dystopian brain tech to galactic imperialism.

I remember picking up the original version of Aberrant, but I never got a chance to play it. I did play the other original Trinity Games briefly though. I still havent had a chance to check out any of the new Trinity Continuum games, but I was excited to see Steve Kenson involved with this one.

I do not have any money for Kickstarter this year. I'll have to get this once it hits retail. I loved the D20 incarnation, looking forward to reading this newer version of the game.
Eldritch Secrets: Discord Server / Facebook Group

Return to “The Wishing Well”