Ray Chapel from Quasar Knight's Fantasy Blog has an article up called: Al-Qadim: Enlightened Monsters (5th Edition) that might be of use to some people.

He is looking at how 5e monsters might fit into Al-Qadim, but let me give it to you in his own words:

Ray Chapel from Quasar Knight's Fantasy Blog wrote:The core al-Qadim products along with City of Delights mention the more common monstrous races, so I figured to write up some entries on other monsters (namely humanoids and giants) in the major 5th Edition books. Right now this blog post handles the core Monster Manual and Volo's Guide, but I may work on Mordenkainen's Tome of Foes and perhaps some 3rd party sourcebooks if there's enough interest. The Monstrous Races sourcebook and its sequel on the DM's Guild even provides balanced racial options for just about every official 5th Edition monster, further sweetening the deal.

What do you think of his suggestions for the Monster Manual and Volo's Guide to Monsters?

I like what he's done. The monsters from Mordenkainen are generally a bit more challenging to add to an Al-Qadim setting. The adventures I've run for AQ tend to be more elemental themed, rather than outer planar themed. Nothing stands out that demands to be placed in AQ, at least off the top of my head, but I'm interested to see what he comes up with if he moves forward with that book.

Holy thread necromancer, Batman! Thank you all for your kind words!

I actually did do an update for Enlightened monsters regarding Mordy's Tome of Foes, albeit as an RPGnet post and not a blog post. I'll copy-paste my findings here for ease of use:

Duergar, drow, githyanki, & githzerai entries: said monster classes/subgroups more or less function normally as they do in the Land of Fate, for they maintain enough ties to their original cultures. 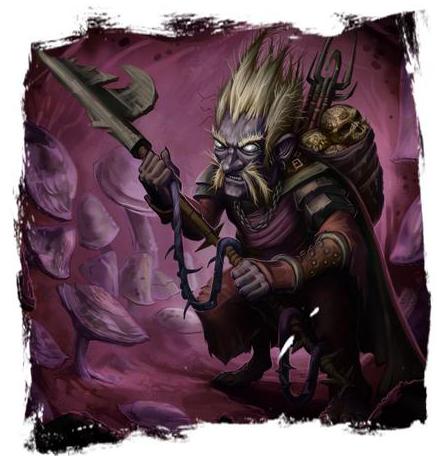 Derro: A long time ago, the brave and valiant Dwarol clan of dwarves fought an existential battle against an ancient underground entity. Battling for decades against the pseudo-god’s enslaved hordes, the Dwarol finally turned the tide in their favor. But the sacrifice was too great, for generations upon generations of Dwarol were afflicted by the monsters’ fell magic and ruinous effects upon their cities. Even after the great evil was sealed away to another plane, its lasting curse subtly spread among the dwarves, manifesting in the creation of the derro, the term itself being a modern evolution of Dwarol.

Derro are cursed with hallucinations throughout their lives, and have a reputation for madness which causes them to be alternatively pitied and shunned by other dwarves. To be a derro is a source of shame, for they are associated with the aberrant monsters of long ago that brought the Dwarol clan to ruin. Many dwarven holds take pains to help derro assimilate into society, but just as many along with the other underdark races force them to live in cramped neighborhoods derisively referred to as “warrens,” “derro dens,” “asylums,” and other less polite names.

Many derro are not aware of their condition, believing that the hallucinations they see to be real. It is very hard for even self-aware and strong-willed members of their race to separate what is real and what is the product of their own imagination. When their madness does not strike, derro are more or less capable of functioning normally.

Derro savants are sorcerers whose own mental state enhances their ambient magic. They are powerful if unpredictable mages, whose wills are so strong they can make what they see reality if only within the confines of their magic.

Giff: Spelljamming vessels rarely if ever visit the Land of Fate, wrongly believing that this grand land has little to offer. Dealings with Zakhara are thus almost entirely relegated to individual travelers making port in Huzuz and such is likely where any giff would be found. The giff’s love of firearms and gunpowder present a unique trading good, although the existence of war magic means that such weapons are in relatively low demand.

Meazel: Refugees who ventured into the Shadowfell long ago, meazels are found only on moonless nights in the most isolated oasis caves and other forlorn places. They fear the world of the sun, for in spite of their inherent powers of darkness and mobility they are unwise in the ways of war and magic. Djinn and various sorcerers are known to entreaty them for discrete services, although to this day no thief has been able to exploit their powers. Meazels disdain material pleasures and view grand, daring heists as needlessly risky.

Nagpa: During the ascension of the first Grand Caliph and the spread of Enlightenment, a cabal of thirteen wizards smelled war in the air. Although unenlightened they cared little for their pagan brethren and sought to profiteer off of both sides by offering magical artifacts, golems, and deadly spells. When a missive came from the Grand Caliph requesting a personal audience, the wizards believed they made it big and figured they were in for the deal of a lifetime. And if not, surely their combined might would be enough to vanquish an upstart cleric?

They were at once right and wrong. Instead of offering riches or praise for their deeds, the Grand Caliph decried their parasitical ways, of how they had enough power to usher in peace and prosperity but instead followed selfish pursuits. Declaring them no better than the vultures of the deserts, the wizards were cursed into hunch-backed humanoid vultures and stripped of much of their magical powers.

It’s been centuries since, and the nagpa still live. For even arrogant wizards have contingencies for the worst, and they did what they could to survive. They influence the darkest reaches of the Caliphate, preying upon the vices of the self-destructive and powerful. All in furtherance of the end goal of bringing down the legacy of that who cursed them. 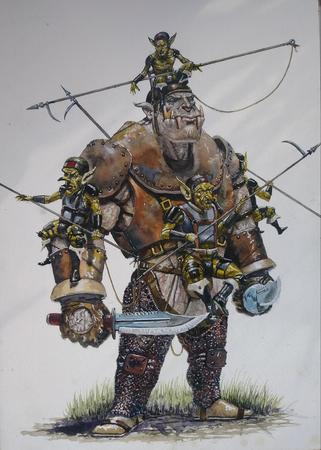 Ogre: The size and strength of ogres gave rise to some new battle tactics among mamluk leigions. The mamluks have a running in-joke of said specialties being that of “simple-minded genius” brought upon by drugs and boredom of idle soldiers. The "ogre battering ram," "ogre bolt launcher," and "ogre howdah" turn said giants into mobile artillery platforms, which at first sound silly but are overall quite practical.

The ogre chain brute has a loftier origin story. It is said that during a long and devastating war against a wicked sha’ir’s army of jinn, an ogre mamluk was literally de-armored from a blast of acidic magic. Looking at the ruined city around him, desperation and cleverness forced him to wreath herself in the twisted metal of broken metal gates and shorn armor held together by chains. Thus was the tradition of the chain brute; ogre and giant warriors of the Dutiful of sufficient martial skill are granted the honor of wearing the chains of their forebears to begin their special training. Those who pass the legendary training regimens become so strong that they can turn chains into a triple-purpose tool with the fluidity of a whip, the striking power of a club, and the protection of chainmail.

Shadar-Kai: Shadar-kai are a tribe of elves who claim to serve Fate herself. They are heralds of doom and loss, mysteriously visiting places on the onset of war, natural disaster, and disease, telling those who will listen of what is to come. In spite of their accurate predictions, some regard them as bad omens to shun and chase off in hopes of warding away the inevitable. The truly wise take heed of their pronouncements.

Skulk: Skulks are the descendants of human tribes enslaved by the drow. A forgotten god liberated them, only to die from a recent divine war. Now without faith and direction, the skulk wander the caves, deserts, and cities as scavengers, using their near-invisibility to take what they can. Many cities with skulk activity attribute disappearing items to the work of thieves and ghosts. But many prominent thieves’ guilds are well aware of the existence of skulks, and are envious of their natural talents. The barbers of Huzuz are fond of the tale of the “Invisible Master,” a lady of thieves so skilled that even her closest confidants could not detect her presence or know of her face. 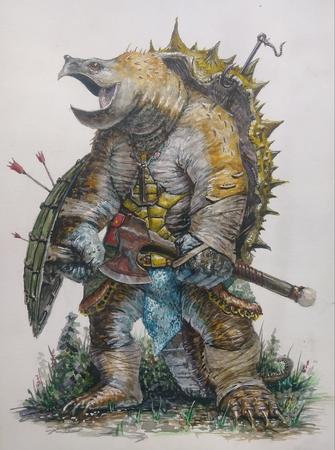 Tortle: The tortles are believed to hail from the southern islands of the Crowded Sea, but even this is in dispute for the creatures are born travelers with little long-term ties to any home. They are an optimistic race, taking delight in everyday mundanities and how beauty can be found in the most unexpected places. Unsurprisingly many find Zakhara to their liking, and take to Enlightenment easily.

Trolls: A troll’s legendary regenerative capabilities are such that some mystics among their race sought the practice of homeopathy. Those who experimented with disease became venom trolls, those who meditated within the deadliest graveyards rot trolls, and those who ravaged their mind with powerful hallucinogens spirit trolls. Dubbed the Devotees of Body (Venom), Mind (Spirit), and Soul (Rot), they took the art of struggle and suffering and made it into a higher calling.

But there is one forbidden devotion, the Devotion of Consumption, where a troll among their order sought the powers of all three by resorting to cannibalism. He gained power, but not the kind he was looking for, growing large in size and gluttonous in temperament. Trolls both secular and of the three major devotions call these renegades “dire trolls” for the treat they pose not just to their philosophy but all civilized folk.

Tortle by Matt Hilker
"Liberty means responsibility. That is why most men dread it."
George Bernard Shaw, 1856-1950
Top
Post Reply
3 posts • Page 1 of 1